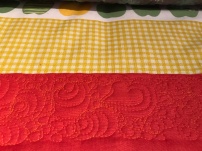 testing. The cat is not happy that the dogs are on his bed…

Stitching the binding – see the wrinkly back

The cat has expressed his unhappiness. The dogs have adjusted their position 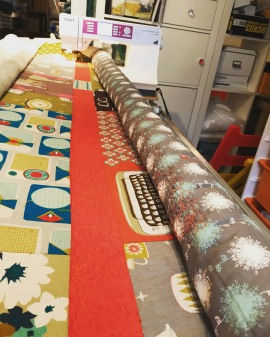 I am, as ever, hugely lucky in my friends.  In times of difficulty (and this is such a time), people have rallied around and supported me, and I feel very loved.  My hugely wonderful friend Penny (who runs Rats as Big as Cats here, and here) invited me to visit her family in Hereford.  Last time I spent more than a day with them was when I began quilting the Japanese quilt.  Which, as it turns out, was over 5 years ago.  On that occasion, I ran out of time to finish the quilting, and so hastily basted what hadn’t been done and brought it home to do in my machine.

Only, that never happened.

So I took the quilt back to Hereford with me, and spent a wonderful (frustrating) day in Penny’s studio, finishing the quilting.  Wonderful, because I finished it.  Frustrating because…. oh, the thread wouldn’t run through the machine without fraying and snagging.  So we went to Doughty’s, who are conveniently just down the road, to get more thread.  I had originally been working in a Gutterman Sulky variegated thread, which worked with the whole colour scheme.  But Penny had offered a Gutterman plain embroidery thread, which worked with the sewing machine (I think I was using Penny’s own machine, five years ago).  And that had run out.  So we went to get more.  I took the empty thread bobbin with me, and they didn’t have *quite* enough.  I needed to change colour.  My eye got distracted by a lovely variegated thread.  Penny very gently suggested it was the same as the one I’d already given up on, but I was insistent.  Magpie-drawn to the pretty colours, I wouldn’t listen.  I spoke to a lady who’d never seen my quilt, or my thread, or my sewing machine.  She was a very nice lady.  She assured me the thread would work perfectly.  So I bought a lot of it.  And we took it back to the studio, and I unrolled the back roller of the quilting frame, manoeuvred the machine out of it, wound some bobbins, threaded up, manoeuvred it all back in again, rolled up the back roller and…. it was exactly the same as the thread I’d already rejected, and frayed and snapped in (predictably) exactly the same way.

I did what any rational adult human would do, and gave serious consideration to burning the whole fucking thing.  With fire.

Luckily, snuggles with Baby A are very soothing, and Penny is very gentle, and the quilt survived my stupidity.

So I got up early(ish – this is a relative concept) in the morning and headed back to Doughty’s to exchange the wrong thread for the right thread.  And whizzed back to Penny’s and repeated the whole unrolling and manoeuvring shenanigans, and set off again.  Bingo!  The right thread worked perfectly!  Within two (maybe three) hours, the quilting was done.

There were some pre-existing challenges with quilting in Penny’s frame.  I had originally, five years ago, made the quilt as a full-size double.  The frame is a queen-size.  So there was always a fit issue.  Over the past five years, the quilt has not shrunk and the frame has not grown.  So I was only able to quilt *most* of the surface.  The original plan was to finish the quilting in my machine, but I had, in the intervening years, made a couple of attempts to manoeuvre this beast by hand, and it was just too heavy to be able to do the density of free machine quilting I’d achieved in the frame.

So yesterday, when I’d done as much as I possibly could in the frame, I simply chopped off the bits the frame hadn’t reached.  So it’s a cut-down quilt.  Apart from the link above, I don’t have any images of its pre-cut-down state.  The link above has images before the borders went on.  And the borders have come off again, now.

When I got home, last night, I whizzed up some binding from the chopped-off borders, and stitched them on in front of the TV.  Then I threw the whole thing in the washing machine.  It’s not perfect – and it was once going to be a technically astounding piece (that’s how I planned it, anyway).  The backing has wrinkled by dint of being taken off the frame and then stored and then put back on the frame in a fairly approximate way.  It’s shorter and narrower than I planned it.  It’s a different quilt in practice than it was in my head.

But this is part of my healing.  Much of my life is suddenly not as I’ve been planning it, in the five years it’s taken me to finish this quilt.  It was all going to be one thing, and now it’s going to be another thing entirely.  I’m sad about the lost borders and different dimensions of my quilt, and I’m quietly devastated about the wider changes.  But the lesson this quilt delivers is twofold: first, a change of plan doesn’t render everything else useless or redundant.  You can work successfully with what’s left, and still end up with something lovely.  Secondly, the love and support of friends makes pretty much anything possible.