Well, yes. It’s been nearly a year, hasn’t it? In my slight defence, I’ve moved house and been preoccupied with other forms of creative expression – there’s been a lot of decorating, some mural painting (below left), a little bit of curtain-type bodging, a new sewing area created – indoors! (below, right), some gardening and a lot of silliness involving – sometimes – making stuff. But not really sewing. 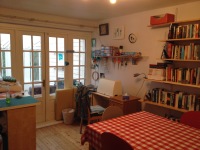 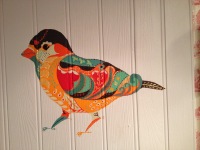 And there’s been some other stuff – the end of Mr P, and a return to singledom.  Lots of work wrinkles. And some life stuff – a child’s wedding; a parent’s fairly significant health issues; a funeral; a difficult and dangerous teenager.  All of which have produced a new tattoo and a fresh piercing – it’s like a grownup way of dealing with my issues.  All of which has meant that I haven’t really had time to do much in the way of creating things.  All of which has meant I need, desperately, to regain some of the inner calm and peace that creating things typically brings me.
And now, it’s Easter.  The house is largely decorated – apart from the very small places that I haven’t been bothered to do because it’s hardly worth taking the time to move the coats out of the porch and living with the clutter, because painting it will take *no time* (yes, there is some logic in there somewhere.  No, I’m buggered if I can find it either).  And the very significant places that I can’t afford to do because bathroom suites and tiles and all that crap so I need to save up.
At Easter, I take time off work and I sew.  It’s what I do. I typically knock up a quilt.  This easter, though, I have lost my mojo.  I really just want to sit on my sofa and drool a while.  But then I have this lush new sewing area.  Indoors! It would be silly to have spent the time making it, and then not use it.  Wouldn’t it?  Why yes, it would.
So I am tackling the wedding present quilt.  I say tackling the wedding present quilt.  So far, I am 2/3 of the way through making a (very simple) back for it.  Then I will baste it.  Then I know exactly how I want to quilt it. Problem is, I’m not sure I can actually sew, any more.  Not sure at all.  So mostly my tackling it involves a series of displacement activities, including this, and middle distancing while contemplating the cure for singledom.
Oh well.  Here goes nothing.  And hello, by the way.  It’s (kind of) nice to be back…